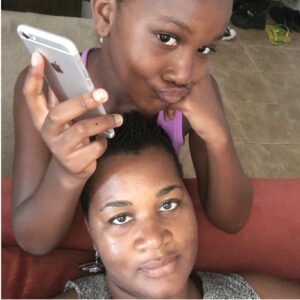 I woke up mad because in my dream I walked on a floor covered with red wet paint.

Mad because this was the third time- and in the dream I hoped that it was final.

I can’t recall the details of what happened when I walked in the first and second time. I just remember walking in a classroom setting, talking to friends and not noticing the paint on the floor until I looked down, only to see that I had stepped in red paint, making a mess, of course!

I recall the reactions of others around me when they saw me walking on the paint the second time. Tami- no, don’t step there! Where? I had already messed up. I couldn’t believe it had happened twice. I also felt like the universe was playing a joke on me. It was a little laughable. And although it didn’t hurt anyone, I thought, I won’t make that mistake anymore. I recall moving on from that but how annoying to have to clean up and start a painting project over.

Well, it wasn’t true that I wouldn’t make that mistake anymore- because when it happened the third time- I had known that I could potentially walk on wet paint. By that time, I had named myself (in my mind) clumsy and forgetful. So I thought about this when entering – don’t do that and don’t distract by talking to others and make sure you step here and not there. As soon I felt something was stuck on my shoe and heard strange utterings from others again, I knew what had happened. Wow. You know how people say, you “thought it up”. It’s true.

I felt embarrassed and amazed at myself for letting it happen again. Tricky- the paint area was covered. I suppose the floor had a covering over it for people like me who may not notice and the red paint was almost finished drying. But I – Tamara Wellons stepped on the cover protecting the paint! The signs were not warning flags to me. I was just walking the same way I always went, carefully, so I thought and slightly happy go lucky about it too. Confidently wrong. I tried to find another word besides wrong but nothing else fit for the occasion.

The painter was very upset- well, annoyed. She wondered- how can she (that being me) not see that there is red wet paint on the floor – again! Why does she keep doing that? But again, I did not mean to. You know, especially after pronouncing myself clumsy and forgetful.

I understand how my children feel when they keep making the same mistakes. In this dream I took the same route with the same obstacles. I have done this many times when I’m driving. Making a right turn here knowing this is the wrong way. Seeing the place where I made the U-turn last time I went the wrong way. I do this in life too.

Over and over is no longer a mistake. Now it’s a habit.

Habit of thoughts are even trickier.

About the Author: Tamara Wellons